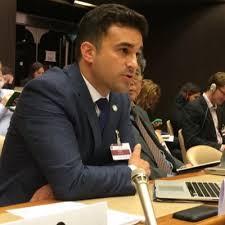 As Dr. Jennifer Allen Simons is a Founding Partner and Canada Chair of Global Zero and The Simons Foundation is their principal sponsor, we are pleased to share this important statement Global Zero's Executive Director, Derek Johnson, made to the United Nations First Committee on Disarmament and International Security in New York on October 18, 2019.

The mission of Global Zero and its international members, including hundreds of former heads of government, senior political leaders and military commanders, is to facilitate the verified elimination of all nuclear weapons everywhere. Our work is grounded in the cold reality that eliminating nuclear weapons is the only protection from their use.

Today, as with climate change, nuclear weapons have metastasized from looming threat to global crisis. Unlike climate change, we don’t know how much time we have left. In every nuclear-armed region of the world, the potential for civilization-ending violence haunts every conflict, every confrontation, every misidentified blip on every screen in every early warning network.

At some point, our luck will run out.

The collapse of the INF Treaty leaves one last leash on the world’s two largest nuclear arsenals. Since 2010, the New START agreement has limited Russian and American strategic arsenals and provided a critical window into both nations’ nuclear capabilities and intentions.

New START expires in just sixteen months. After that, we’re in uncharted waters.

The United States and Russia should immediately extend New START until 2026 without conditions, and further agree to a mutual moratorium on INF-class deployments in Eurasia. This can be achieved with the stroke of a pen. Every member state should demand it of U.S. and Russian leadership at every opportunity.

Just as critically, we have to keep our eyes on the future and lay the groundwork for what must come next: bringing other nuclear-armed states into the process.

To that end, Global Zero is developing a draft follow-on treaty that can be considered and advanced by the American and Russian governments following the U.S. presidential election in 2020. Our aim is to facilitate rapid negotiations that shrink Russian and U.S. arsenals by more than half, and pledge even deeper cuts on the condition that China and possibly others agree to cap their stockpiles.

We seek renewal of strategic stability talks between China and the United States, and dialogue on a joint U.S.-Russia-China early-warning center to monitor and assess missile launches worldwide – and which could later expand to include other nuclear-armed states. These discussions would improve understanding of the non-nuclear components of major concern to the parties, such as American ballistic missile defense and emerging Russian and Chinese anti-satellite weapons and hypersonic glide vehicles. Further, they would provide a process for discussing cyber risks and much-needed rules of the road related to nuclear command and control.

Global Zero also champions the unequivocal adoption of No First Use by nuclear-armed states. There is perhaps no single more important step we could take right now to reduce nuclear risks and advance the cause of disarmament than No First Use, codified by executive agreements and treaties, and backed by operational changes that make those commitments credible.

No First Use would stabilize crises by limiting opportunities to miscalculate intentions and lowering the pressure to preempt a nuclear attack. It would reduce the very real risk of a nuclear strike launched in response to a false alarm.

No First Use would also bring policy and posture into alignment with the mainstream normative view that a nuclear war cannot be won and must never be fought. Missiles would be de-alerted. First strike weapons would be scrapped. And small nuclear stockpiles meant only to survive a first strike would replace the massive Cold War arsenals used to threaten one.

All of this would greatly diminish governments’ reliance on these weapons and make them vulnerable to disarmament.

From No First Use flows the logic of zero. That is why our goal is for all nuclear-armed states to negotiate by the end of 2022 a legally-binding treaty prohibiting the first use or threat of first use of nuclear weapons of any kind, for any purpose.

Nuclear weapons are the most destructive, barbaric weapons ever created. They also tell a story.

The high priests of deterrence would have us believe that story is a story about the world: about sovereignty and security, stability and even peace. A story about a “necessary evil” that holds greater evil in the world at bay.
That story is wrong. It is repeated by the powerful and keeps things as they are.

I say instead that nuclear weapons are a story about us: about who we are and what we might yet be. A story about scientific ingenuity without wisdom or restraint; about exploitation and oppression of vulnerable populations upon whose backs these weapons were built; about human beings’ capacity for cruelty and what happens when our self-destructive impulses are left unchecked; about the heights of our arrogance, the depths of our complacency, and the overwhelming power of our fears.

Eliminating nuclear weapons would offer us a new story. A story that says we are the weapons that we build, but we need not forever be the mistakes that we have made.

If we begin now, if nuclear-armed governments embrace this goal and make it a top priority, zero can be accomplished within a decade. The barriers to emptying these arsenals are political, not technical, and certainly not beyond human imagination, capacity, or control.

That is a story all of us can live to tell."

Global Zero is a non-partisan international initiative dedicated to public education, dialogue and awareness-raising among the public and opinion leaders about the urgent nuclear threat and proposals for the elimination of all nuclear weapons. The Simons Foundation Canada is the principal sponsor of Global Zero and Dr. Jennifer Allen Simons is a Founding Partner and Canada Chair of Global Zero.