Report of the Simons Forum on The Responsibility to Protect: Re-Energizing the Key Players 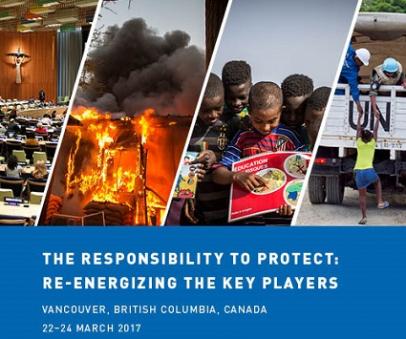 The Conference and Forum on The Responsibility to Protect: Re-Energizing the Key Players was convened by The Simons Foundation under the auspices of the Simons Visiting Chair in International Law and Human Security, Simon Fraser University (SFU), and took place between March 22 and 24, 2017 at SFU’s Morris J. Wosk Centre for Dialogue in Vancouver.

It began with a public lecture on the evening of March 22 by SFU's 2016-2017 Simons Visiting Chair in International Law and Human Security, Professor the Hon. Gareth Evans, co-sponsored with SFU’s Centre for Dialogue and attended by over 200 people.

This was followed by a two-day high-level invitational forum of 30 experts who had played significant roles in the creation, evolution or implementation of R2P.  In the course of the conference program successive panel-led discussions explored the impact of the Responsibility to Protect (R2P) to date, and the roles of the UN Secretary-General and Secretariat, the Permanent Five members of the Security Council (the United States, United Kingdom, France, Russia and China); Brazil, India and South Africa and countries of the global South; Canada and other middle powers; and of civil society organizations and academics.

Prior to the meetings, participants had received a Conference Framework Statement. It noted that since adoption of the Responsibility to Protect (R2P) in 2005 by the UN General Assembly, near-universal agreement has been forged around the principle that all governments have a responsibility to protect populations from mass atrocity crimes.  These normative gains have been accompanied by significant advances in institutional preparedness, many instances of effective preventive action, and a number of instances of effective reactive action in response to atrocities actually occurring. Yet there has been a clear inability to match those gains with the kind of consistent political will and comprehensive resources necessary to end genocide and other mass atrocity crimes once and for all.

In his opening remarks, the Conference Chair challenged participants to take systematic stock both of what had been achieved and what remained to be achieved by the Responsibility to Protect – as a normative force, an institutional catalyst, and as a framework for effective action, both preventive and reactive.  The conference was intended to identify ways and means to reinvigorate R2P, in particular by focusing on the roles of the key players. As Gareth Evans put it, the stakes were high:

This high-level conference aims to show the way for R2P now to be renewed and made fully real, so that when we say ‘Never Again’ to genocide and other mass atrocity crimes, the international community really means it.  Our common humanity demands no less.

This report, while based on the proceedings, is intended to stand alone – giving enough information in the text and appendices about the history of R2P and its applications since 2005 to allow those who are unfamiliar with the concept to follow the debate. Those more familiar with R2P’s nuances and complexities might usefully turn directly to the section on ‘Moving Forward’.

The full report is available for viewing and download at the links below.

Report of the Simons Forum on
The Responsibility to Protect: Re-Energizing the Key Players

For more information on the conference, please see our page on the Simons Forum on The Responsibility to Protect: Re-Energizing the Key Players.

File Attachment
Report of the Simons Forum on the Responsibility to Protect-Re-Energizing the Key Players.pdf