The Responsibility to Protect: Re-Energizing the Key Players 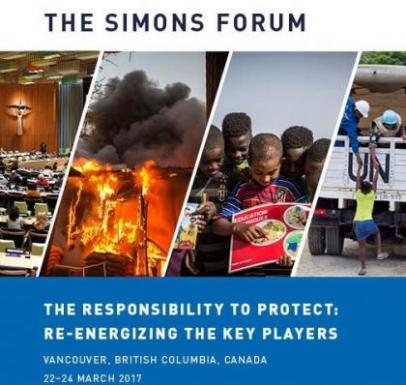 -Convened by The Simons Foundation under the auspices of the Simons Visiting Chair in International Law and Human Security at Simon Fraser University in Vancouver, Canada

Considerable strides have been made in advancing and implementing the principle of the Responsibility to Protect (R2P) since its unanimous adoption by all United Nations (UN) member states at the 2005 World Summit. Informed by the foundational 2001 report of the Canadian-sponsored International Commission on Intervention and State Sovereignty, R2P is the global political commitment to prevent and halt genocide, ethnic cleansing, other crimes against humanity and major war crimes. In the decade since its adoption by the UN General Assembly, near-universal agreement has been forged around the principle that all governments have a responsibility to protect populations from mass atrocity crimes.

These normative gains have been accompanied by significant advances in institutional preparedness, many instances of effective preventive action, and a number of instances of effective reactive action in response to atrocities actually occurring. Yet there has been a clear inability to match these gains with the kind of consistent political will and comprehensive resources necessary to end genocide and other mass atrocity crimes once and for all.  The failures of the international community, and above all in Syria since 2011, have highlighted the need to close the gap between rhetorical commitment and determined, effective international action in every case where such action can make a life-saving difference. And that means re-energizing all the international players, both governmental and non-governmental, whose attitudes and actions will be crucial in making that happen.

The aim of this conference is to take systematic stock both of what has been achieved and what remains to be achieved by R2P – as a normative force, an institutional catalyst, and as a framework for effective action, both preventive and reactive.  It will also seek to identify with clarity and precision the roles that need to be played, if R2P aspirations are to become fully real, by the most relevant actors in the international community.

On the basic question of the acceptance of R2P as a universal principle, or normative standard, there have unquestionably been major gains, of a kind unimaginable for the earlier, highly contested, concept of “humanitarian intervention” which it has now almost completely displaced in international debate.  The best evidence lies in the statements made in the UN General Assembly annual interactive debates since 2009, and in the nearly 50 resolutions specifically employing “responsibility to protect” language passed by the Security Council since 2006. In Geneva, the Human Rights Council has passed 16 resolutions referencing R2P, and the norm has been utilized in the context of the Council’s special procedures and mechanisms.

R2P has also been an institutional change agent. More than 50 countries and intergovernmental organizations have now designated “focal points” to analyze atrocity risks and help mobilize appropriate responses. Groups of state “Friends of R2P” exist in New York and Geneva to coordinate UN activity. The common agendas of human rights, mass atrocity prevention and civilian protection have been strengthened by the Secretary-General’s Human Rights up Front ­Action Plan and the Kigali Principles on the Protection of Civilians, launched in May 2015. In a number of states civilian response capability is receiving much more organized attention, and militaries are rethinking their force configuration, doctrine, rules of engagement and training to better deal with mass atrocity response operations.

R2P-driven preventive strategies have had a number of notable successes over the last decade, in East and West Africa and parts of Asia. The clear protection of civilians mandates now given to nearly all UN peacekeeping operations – built on R2P’s sister concept of Protection of Civilians in Armed Conflict (POC) – have worked to prevent a number of simmering post-conflict situations from again exploding. And there is a much better understanding than there used to be of the large toolbox of preventive measures available at different stages of the conflict cycle. But it is still the case that there is more rhetoric than substance when it comes to really systematic preventive activity.

When it comes to effective reaction – stopping atrocity crimes already occurring – R2P has had some notable successes, including Kenya, Cote d’Ivoire, and the initial response to Libya in 2011. But these have been outweighed by obvious failures, including Sri Lanka in 2009, Libya subsequently, Iraq since 2013, Yemen since 2014 and, most catastrophically, Syria since 2011, where the Security Council has been almost paralysed for five years, since it divided badly over the implementation of its military mandate in Libya.

There is a critical need in this context for the most influential global powers, inside and outside the Security Council – the ‘P3’ (US, UK and France), the ‘P2’ (Russia and China), and the leading countries of the global South (including India, Brazil, South Africa and Nigeria) – to again find common ground when it comes to responding to major mass atrocity crises. To encourage them to do so, there is a major global advocacy role also to be played, as demonstrated often enough in the past in this and other contexts, by key middle power players like Canada and Australia.  And there are many civil society organization and academic voices that can also be seriously influential, both regionally and globally.

What is necessary, above all, is that every one of these key players become re-energized in their commitment to ending what Kofi Annan rightly described as “gross and systematic violations of human rights that offend every precept of our common humanity”.  Getting such commitments made and implemented has always been a challenge. Canada started the process by establishing in 2000 the International Commission which gave birth to R2P. This high-level conference aims to show the way for them now to be renewed and made fully real, so that when we say “Never Again” to genocide and other mass atrocity crimes, the international community really means it.  Our common humanity demands no less.

Organization of the Conference

The Conference was convened by The Simons Foundation under the auspices of the Simons Visiting Chair in International Law and Human Security at Simon Fraser University.

It took place between 22 and 24 March, beginning with a public lecture on the evening of 22 March, followed by two days of panel-led discussion. Successive panels explored the impact or R2P to date, and the roles of the UN Secretary-General and Secretariat, the P5 countries, Canada and other middle powers, the key countries of the global South, and of civil society organizations and academics.

The Conference was chaired, and the opening public lecture given,  by Professor the Hon. Gareth Evans AC QC, Simons Visiting Chair in International Law and Human Security at Simon Fraser University, former Australian Foreign Minister, President Emeritus of the International Crisis Group, and Co-Chair of the International Commission on Intervention and State Sovereignty.

CONFERENCE REPORT: The Simons Forum on "The Responsibility to Protect: Re-Energizing the Key Players"