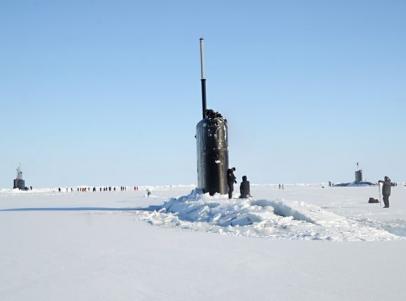 USS Connecticut, USS Hartford and HMS Trenchant surface in the Arctic during ICEX 2018 (photo: US Navy Flickr, Darryl I. Wood)

The Arctic is the primary home of Russia’s nuclear ballistic missile submarine force. That fleet, like its American counterpart, is being “modernized,” the subs are patrolling more often, and, inevitably, American attack submarines are paying increasing attention. Four decades ago, in a climate of intense Cold War confrontation and nuclear dangers, when American and Soviet ballistic missile submarines and the attack subs that trailed them roamed the oceans, strategists, peace researchers, and some military planners grew intensely worried about the strategic instability wrought by such dangerous cat and mouse maneuvers. That in turn led to innovative proposals for anti-submarine-warfare-free zones as one way of easing tensions and, especially, as a means of reducing the risks that mishaps, miscalculations, or miscommunications would escalate out of control. The Arctic figured prominently in those proposals – the essential elements of which continue to have merit and, unfortunately, relevance.

Despite today’s obvious NATO-Russia tensions, the Arctic, where NATO states and Russia are both a prominent presence, remains a region of relative geopolitical calm with all sides still credibly denying the presence of active military threats and insisting that regional conflicts will be resolved through cooperation and international law. It’s a welcome and genuine regional reality, one that seems deeply incongruous with the concentration in the Arctic of submarines bearing nuclear-armed intercontinental-range ballistic missiles, along with attack submarines meant to either protect or threaten them.

For now at least, the absence of state-to-state and Arctic-specific military threats is not a case of wishful thinking. It is the considered judgement of both the Kremlin and the current US Government. While Russian Arctic security policies emphasize the refurbishment of its northern military and a growing role for it in protecting national interests in the region, those policies are also replete with commitments to maintaining stability and military cooperation toward that end.  American authorities also continue to affirm the absence of Arctic-specific military threats. The US Government Accountability Office (GAO has just reviewed the Pentagon’s assessment of the Arctic threat level, and both have concluded that the threat “remains low” and that the US Department of Defense has the capabilities that are required to carry out the current Arctic Strategy.  That strategy, established in 2016, is to pursue “two overarching objectives: to (1) ensure security, support safety, and promote defense cooperation and (2) prepare to respond to a wide range of challenges and contingencies to maintain stability in the region.” Those two objectives are made realistic, says the GAO, by the “low level of military threat in the Arctic” and by “the stated commitment of the Arctic nations to work within a common framework of diplomatic engagement.”

Sea-based nuclear weapons in the Arctic are strategic – which is to say, they are meant to influence, not regional defence dynamics or territorial ambitions, but the global postures and deterrence strategies of the United States and Russia.

1. Nuclear-armed submarines in the Arctic

Russia now operates up to 12 submarines whose sole mission is to carry intercontinental nuclear-armed ballistic missiles (such subs are designated SSBNs). Three of these are the new “Borei” ballistic missile subs. Each Borei SSBN can carry 16 Bulava sea-launched ballistic missiles (SLBM), each armed with up to six nuclear warheads. And each Borei has six tubes for launching heavy weight torpedoes. The Russian SSBN fleet also includes six Delta VI subs, also with a capacity for 16 missiles, each carrying up to four warheads, plus four tubes each for heavy weight torpedoes. The remaining three boats in the current SSBN fleet are Delta III subs with a capacity for up to 16 missiles (up to three warheads each) and four tubes each for heavy weight torpedoes plus two tubes for light weight torpedoes. None of the torpedoes is nuclear-armed, while the fleet’s ballistic missiles have the combined capacity to launch 768 warheads, although only some of the subs are normally on patrol, and not all missiles will be armed to their full capacity of warheads. The US Congressional Research Service estimates that Russia currently has about 640 sea-launched warheads available for deployment.  At least seven of the Russian SSBNS are assumed to be deployed with the Northern fleet and based on the Arctic’s Kola Peninsula.

The Russian SSBN modernization program is intended to increase the Borei fleet to eight submarines by the mid-2020s, replacing the Delta VI and III subs, thus reducing the overall SSBN force, Hans Kristensen and Robert S. Norris of the authoritative Nuclear Notebook note that the future Russian SSBN fleet of exclusively Borei subs will be capable of carrying more warheads than does the current fleet, thus heightening the target value of each SSBN.  More warheads on fewer subs is a destabilizing development inasmuch as the pre-emptive disabling of theses second-strike deterrent forces may be viewed as more feasible, and hence more tempting. Largely for that reason, it is anticipated that the Kremlin will order another four of the Borei subs, for a fleet of 12 to be equally divided between the Pacific and the Arctic.

The US has 14 nuclear ballistic missile submarines (SSBNs),  each capable of carrying 24 inter-continental range ballistic missiles (the Trident II D5), but now, modified to comply with the New START Treaty, they carry 20 missiles each. Normally, two of these boats are in overhaul and not considered operational – so the usual count is 12 operational American SSBNs, carrying up to 240 missiles (even though not all 12 are always on patrol, and those on patrol do not necessarily carry the full complement of 20 missiles). Each missile is capable of being armed with eight nuclear warheads, but the average payload is said to be four to five warheads, leading to the current Nuclear Notebook count of 1,090 warheads on 12 deployed SSBNs. Each sub also has four tubes for launching heavy weight torpedoes. Eight to 10 subs are at sea at any given time, four or five of which are considered to be on “hard alert,” with another four or five capable of being brought to alert status within hours or days. American SSBNs do not patrol in the Arctic.

US nuclear “modernization” of the SSBN fleet includes the upgrading of current missiles with new guidance systems to enhance targeting. The more consequential “modernization” has the Pentagon planning to replace the existing subs with 12 new nuclear weapons submarines and the Congressional Budget Office estimates that development and capital acquisition costs will be in excess of $80 billion in today’s dollars (or about $7 billion each),  and that does not include maintenance and operating costs or the cost of their nuclear weapons. Even the Navy is worried that things are getting out of hand, with the SSBNs robbing it of the funds it needs to pay for all the other ships it has planned. So the Navy has come up with a novel solution – create a special and separate “National Sea-Based Deterrence Fund” so that the Navy’s regular budget won’t have to cover the SSBNs.

It’s worth noting that China is also acquiring a significant fleet, possibly five, of nuclear-powered ballistic missile submarines (SSBNs).  According to the Bulletin of the Atomic Scientists, each of these is designed to carry up to 12 intercontinental ballistic missiles with one nuclear warhead each. The missiles are thought to have a range of 7,000 to 7,400 kms, which means that from patrols in waters near China, the missiles could reach Alaska and Hawaii, but not the continental US. It’s not clear whether the Chinese have sent their SSBN on any patrols with nuclear weapons on board. The current Jin-class SSBN is said to be “very noisy,” and analysts assume that China will go on to develop a next generation SSBN.

2. The attack submarines that trail the nuclear-armed subs

Russia currently operates  49 attack submarines, 26 of which are nuclear-powered of various classes and equipped with heavy weight torpedoes and anti-ship and anti-submarine missiles, and can be fitted with land attack cruise missiles. The rest are 23 diesel-electric attack submarines (SSNs) with similar armaments. The diesel-electric subs are regarded as among the world’s quietists subs. The US currently operates  54 nuclear powered attack submarines,  all are armed with heavy weight torpedoes, and most also have tactical range land attack cruise missiles – all with conventional, or non-nuclear, warheads. About 60 percent of American attack submarines operate in the Pacific and 40 percent in the Atlantic, with regular forays into the Arctic.

In 2015 an American Seawolf variant of attack submarine (these are said to be quieter and faster than the other attack subs, but they also proved much more expensive, and thus production ended in the 1990s after only three were built) spent two months submerged under the Arctic ice,  and in 2013 another Seawolf travelled from Washington State on the American west coast to Norway via the Arctic Ocean.  Included in the total inventory of attack subs are 12 newer versions, the Virginia-Class, of which more are being built. They also engage in intelligence gathering and can also carry “unmanned undersea vehicles.” Another four Ohio-class, or SSBN ballistic missile submarines, have been converted to attack submarines (SSGNs) carrying conventionally armed land-attack cruise missiles. The Pentagon is planning to maintain 4,000 conventionally-armed sea-launched cruise missiles (and these, of course, are in addition to air-launched cruise missiles).

Tracking or chasing SSBNs on patrol is a dangerous but growing focus of attack submarines. A March 2018 Pentagon report, “Commander’s Intent for the United States Submarine Force,” describes “the main role” of US attack submarines as being to “hold the adversary’s strategic assets at risk from the undersea,” notably including SSBNs on patrol  - and those strategic anti-submarine warfare (ASW) patrols include the Arctic.

In other words, the US defines strategic anti-submarine warfare as a priority, the further development of which is taken to be an integral part of its nuclear force’s modernization program. The Pentagon’s 2018 strategy refers to “developing options to counter competitors’ coercive strategies”  – including sea-based nuclear forces.  Continue reading....