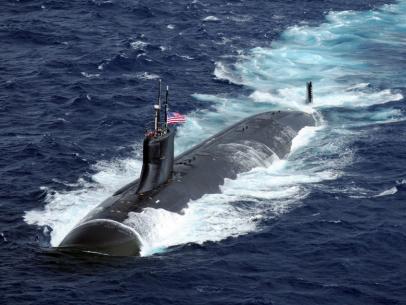 Headlines tell of a burgeoning Russian/American naval nuclear arms race and already tens of billions of dollars are being promised and spent in both countries on “modernizing” seaborne strategic nuclear weapons systems. While tactical nuclear weapons have been kept off their attack and general purpose submarines for at least a generation, there are indications they may be finding their way back. In the meantime, there is not yet any international regime or treaty or political will in place or contemplated for the exercise of seaborne nuclear restraint.

The US now operates 14 nuclear ballistic missile submarines (SSBNs – designated Ohio-class), each capable of carrying 24 inter-continental range ballistic missiles (the Trident II D5). Normally, two of these boats are in overhaul and not considered operational – so the usual count is 12 operational submarines carrying 288 missiles (even though not all 12 are always on patrol, and those on patrol do not necessarily carry the full complement of 24 missiles). Each missile caries three to six warheads, leading to the current count of 1,152 warheads on 12 deployed SSBNs. About 60 percent of the force operates in the Pacific and the rest in the Atlantic.

US nuclear modernization programs for the SSBNs include up to 1600 new warheads (updated versions of existing warheads with enhanced targeting capabilities), to be built by 2019 (some of these are to go to the UK in a slightly modified version). A new “life-extended” version of the D5 Trident missile is also underway. The Pentagon plans to replace the existing SSBNs with 12 new SSBN(X) nuclear weapons submarines and the Congressional Budget Office estimates that development and capital acquisition costs promise to be in excess of $80 billion in today’s dollars (or about $7 billion each), and that does not include maintenance and operating costs or the cost of their nuclear weapons. Even the Navy is worried that things may be getting out of hand, with the SSBNs robbing the budget it needs to pay for all the other ships it has planned, so it’s come up with a novel solution – create a special and separate “National Sea-Based Deterrence Fund” so that the Navy’s regular budget won’t have to cover the SSBNs. It’s a sleight of hand attractive to the Navy, but it’s a work in progress inasmuch as there is no sign of how the needed money would get into the National Sea-Based Deterrence Fund – although the money lenders and the tax collectors have a pretty good idea.

But “promise” is still the right word inasmuch as the shipbuilding industry sees great promise in them. An American investment blog explains that for the two prime SSBN contractors, General Dynamics (which Canadians know as the owner of the London, Ontario plant that builds the armoured vehicles being sold to Saudi Arabia) and Huntington Igalls, it’s all about the impact on their bottom line – for General Dynamics, “the fate of SSBN(X) has the potential to move the needle on revenue in a very big way – up or down,” while for Huntington Ingalls, whose only business is building warships, “calling SSBN(X) a life-or-death program for Huntington might sound like exaggeration – but really, that’s exactly what it is.”

Russia now operates 12 nuclear missile SSBNs, three of which are the new “Borei” ballistic missile subs which will eventually replace all the others. Seven of the current 12 SSBNs are based in the Arctic with the Northern Fleet, and five are with the Pacific Fleet. Each is capable of carrying 16 inter-continental range ballistic missiles (the Bulava being the most recent model and deployed on the Borei). Each missile carries three to six warheads, leading analysts to estimate that the Russian SSBN fleet carries close to 800 warheads, although not all 12 of the subs are operational at one time. The Russian SSBN modernization program is focused on bringing a full fleet of eight Borei class subs on stream by the mid-2020s. Hans Kristensen and Robert S. Norris of the authoritative Nuclear Notebook note that the future Russian SSBN fleet will be capable of carrying more warheads than does the current fleet, meaning more warheads on fewer platforms. It also means that “the strategic importance of the SSBN’s fleet will increase,” a destabilizing move inasmuch as the fleet could become a more tempting target for a pre-emptive first strike.  Continue reading...