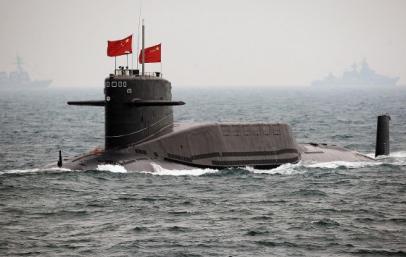 A single provocative sentence about China deploying nuclear-armed submarines in the Arctic led much of the commentary on the Pentagon’s May 2019 report on developments in the Chinese military. The reference was obviously meant to stoke alarm, and as long as competitive nuclear weapons “modernization” proceeds apace – especially in the United States, Russia, and China – there is little doubt that China could one day be capable of conducting submarine patrols in the Arctic, but that doesn’t answer the question of why they would want to.

China’s Arctic interests and ambitions are not in serious doubt.  The development of a reliable trans-Arctic shipping route tops the list, and that in turn shapes an interest in developing a regional maritime infrastructure, echoing its “belt and road” initiatives elsewhere – envisioning the Arctic joining the series of trade corridors being pursued in Africa, Asia, and Eurasia.  Cooperation with Russia in transportation and resource extraction will expand. A Chinese polar research institute has been operating since 2009. Icebreakers are being built. China is investing in Greenland’s resource sector, with a particular interest in its rare earth minerals, and is engaged with Iceland, especially in scientific research.

Some see danger in China’s infrastructure interests. Civilian facilities like ports are dual-use facilities with obvious military applications. And the scientific research that China conducts in the North could no doubt produce militarily useful information. Among the high-profile worriers is US Secretary of State Mike Pompeo, who sees the region as “an arena of global power and competition” owing to vast reserves of oil, gas, minerals and fish stocks, and so he asks the question (without any sense of irony, given US military deployments in the South China Sea): “Do we want the Arctic Ocean to transform into a new South China Sea, fraught with militarisation and competing territorial claims?”

The Pentagon’s provocative sentence that got all the attention warns that “civilian research could support a strengthened Chinese military presence in the Arctic Ocean, which could include deploying submarines to the region as a deterrent against nuclear attacks” (emphasis added).

A submarine “deterrent” weapon means a submarine armed with strategic range ballistic missiles (SSBNs), and that begs the obvious questions: does China have SSBNs capable of Arctic operations, and if it did, what would be the point of operating in the Arctic?

China, with global interests that certainly include the Arctic, is in fact acquiring a significant fleet of nuclear-powered submarines equipped with long-range and nuclear-tipped ballistic missiles (by now up to six such SSBNs – referred to as Jin-class, type 094 subs). Each of these subs is designed to carry up to 12 sea-launched intercontinental ballistic missiles (SLBMs) with one nuclear warhead each.  The missiles are thought to have a range of 7,000 to 7,400 kms, which means that from patrols in waters near China, they  could strike targets in Alaska and Hawaii, but not in the contiguous United States. To maximize the deterrent impact of those SSBNs, they would have to be reliably capable of deploying outside the regional bastions of the South China Sea, or the East China and Yellow Seaa, to the Pacific to put their missiles in reach of the American heartland. Of course, this nascent SSBN force is not China’s only nuclear deterrent – it has land-based, mobile, nuclear-armed inter-continental ballistic missiles with ranges to strike anywhere in the US. Their mobility ensures that enough would survive a first strike to provide an assured second or retaliatory strike capable of doing unacceptable damage in the American heartland – the basic role of a nuclear deterrent force being to dissuade an adversary from launching an initial attack. China also has nuclear bomber capabilities, and is developing a new generation nuclear capable aircraft, that are within range of American military facilities in east Asia.

China has obviously decided to mimic the US and Russia to pursue a nuclear triad (that is, the capability to launch nuclear weapons from land, air, and sea). It is not known whether the Chinese have to date sent their SSBNs, the sea-based element of the triad, on patrols with nuclear weapons on board, whether in their home waters or beyond. The current six (four available and two being readied for operations) are said to be “very noisy,” and analysts assume that China will go on to develop a next generation SSBN that is quieter and more difficult to detect.  And, to be sure, at some point, China is bound to acquire the technical capability to patrol in the Arctic, and that would put even its current SSBN-based missiles within range of the American heartland. But, why would they?

Chinese SSBNs in the Arctic?

As noted, the primary requirement of a Chinese sea-based nuclear deterrent force is that it be able to survive a first strike and have the means, in a post-nuclear-attack environment, to launch a retaliatory or second strike. That is most readily accomplished, most analysts agree,  by deploying its SSBNs in regional bastions, where they can be better protected from American attack subs. In their home waters, the Chinese SSBNs can be accompanied by complementary naval forces, and a Reuters special report quotes military and intelligence analysts as observing that when Chinese SSBNs put to sea in the South China Sea they are indeed “flanked by protective screens of surface warships and aircraft on station to track foreign submarines.”

There are really only two reasons why China would want those SSBNs to leave their bastions. The first would be to get their missiles in range of the American heartland, but the urgency of that can be overstated, since China already has survivable land-based systems that can do that. It is also safe to assume that in a world still burdened by nuclear arms racing, China will develop new generations of SLBMs (sea-launched strategic range ballistic missiles) of a sufficient range to reach American heartland targets from within their bastions.

The second reason to leave the bastion would be if they became vulnerable there to a concerted offensive by hostile attack submarines – as in a gathering crisis in which America attack submarines and other anti-submarine warfare systems (ASW) were making moves to converge on the Chinese bastions and render the latter’s SSBNs vulnerable. That would signal a possible pre-emptive first strike on China (why else would they threaten pre-emptive attacks on second strike weapons?) and would prompt attempts by Chinese SSBNs to reach the open Pacific.

The fact that such a scenario seems unlikely does not mean that China regards it as impossible, especially since the Americans have stated directly that Chinese SSBNs must become the focus of American attack submarines (SSNs). Admiral Harry Harris, while head of US Pacific Command, told a Congressional Committee that China’s “SSBN will give [it] an important strategic capability that must be countered,”  and reports suggest the Americans are in fact pursuing a more aggressive ASWe strategy across East Asia.  Continue reading...