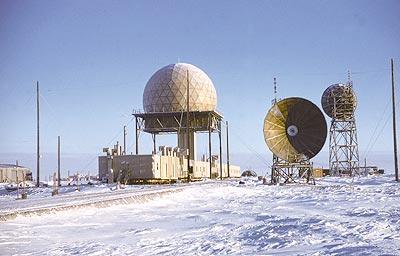 Canada and the United States have begun planning a replacement for the North Warning System, the network of air defence radars across the top of the continent. Jointly funded and operated through NORAD, though located primarily in Canada, the system’s renewal comes in the context of a persistent Cold War revivalism that presages a preoccupation with national defence and geostrategic competition. But another feature of the current context is broad recognition that the changing physical environment and increasing access to and activity in the Arctic drive a priority need for enhanced domain awareness within the region to support public safety, law enforcement, and sovereignty protection, while also serving national defence and strategic stability.

Replacing the North American Arctic’s North Warning System (NWS) will be an extended and expensive process, with construction unlikely to be completed before the mid-2030s. The chain of Arctic radar stations monitors air approaches to the northern mainland territories of Canada and the US. It came on line in the early 1990s as a replacement for the Cold War inspired Distant Early Warning (DEW) Line of northern radars built in the mid 1950s when the Soviet Bomber threat loomed large. The DEW Line never had, and the NWS does not now have, any capacity to monitor hostile aircraft over extended distances; the idea was and is to draw a line in the snow to serve as a tripwire signalling an attack from the north and heading south.

In those early Cold War years Canada shared US concerns about the bomber threat (the Canadian Arctic being the route by which the Soviet aircraft would head to the US heartland), but a major factor in building the DEW Line was the recognition that the Americans required it and would not, and could hardly be expected to, tolerate a blind spot in the Canadian north that would deny them early warning of an attack en route to the lower American mainland – in other words, if Canada would not cooperate in building a line of radars, the US would find its own ways of monitoring Canadian territory for signs of Soviet attack, with major implications for Canadian sovereignty.

Canada understood that in order to avoid that kind of American “help” it would have to support and be part of a credible system to monitor Canadian territory on behalf of both countries (hence, the frequently noted “defence-against-help” reality for Canadian defence policy). It’s a condition that also applied when the NWS was built, and it still applies. Canada shares a continent with the Americans and is simply obliged to make a credible contribution to its defence – and the American definition of credible is the one that counts.

Soon after the DEW Line was built in the 1950s, the Soviet bomber threat was much degraded, with attention turning to the post-Sputnik Soviet missile threat. By the mid-1980s the old Soviet bomber threat was certainly not a central concern in the minds of North American defence planners, but the Soviet Union did continue to maintain a substantial strategic bomber capability that regularly, even if infrequently, patrolled within range of North America. Added to that, cruise missiles capable of being fired from those bombers were emerging. Thus, by the early 1990s, the DEW line was replaced with the NWS radars, supplemented by American Airborne Warning and Control System (AWACS) aircraft that were permitted to operate in Canada, and long-range radars on the Pacific and Atlantic coasts.

That was more than two decades ago, and now the Government’s June 2017 Defence policy document describes the NWS as approaching “the end of its life expectancy from a technological and functional perspective,” and reports that bilateral efforts are already underway to develop a successor early warning system.

The cost is unknown, but given that the cost of the NWS ran into the billions, its replacement promises to cost many billions more.  The replacement timeline will extend over at least two decades: research and analysis into options to be completed by 2020; the chosen system to be approved in 2021; from that is to follow a request for proposals from industry to be completed by 2023; with the final contract to be awarded in 2024 (the Canadian procurement record might suggest that is an optimistic timeline). Delivery or installation of the system is expected to take a least a decade, with completion anticipated for the mid-2030s or beyond.  The plan is for a “system of systems” designed to integrate radars, maritime sensors, satellites, drones, and other technologies.

The All Domain Situational Awareness Science and Technology Program managed by Defence Research and Development Canada (DRDC) includes plans to spend $133 million over five years on research and analysis in support of enhancements to monitoring the air and maritime (surface and subsurface) approaches to Canada, with a particular emphasis on the Arctic. The effort will include international cooperation with the Five Eyes states (Canada, Australia, New Zealand, United Kingdom, US),  with a focus on four areas:
•    Strategic surveillance of airborne traffic and aerospace warning;
•    Awareness of maritime traffic in Canadian approaches and Arctic littoral regions;
•    Awareness of sub-surface activity approaching or in Canada’s North; and
•    Analysis of sensor mixes and information integration and sharing for all domain awareness to enable detection of modern threats beyond the threshold of the current systems. Continue reading...