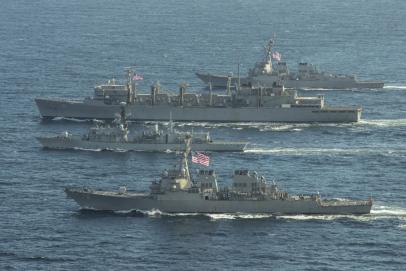 One of the more troubling manifestations of re-emerging big power competition in the Arctic is the apparent determination of both the US and Russia to demonstrate their willingness to mount destabilizing anti-submarine warfare operations in the Barents Sea and the North Atlantic.

A distracted world paid little attention in mid-May when an American and British naval group carried out five days of sailing in the Barents Sea  – the first time since the 1980s that American war ships had ventured into the Arctic waters where Russia’s sea-based nuclear deterrent forces routinely patrol.

In March, Russian anti-submarine warfare (ASW) aircraft had travelled south from the Barents Sea to patrol well into the North Atlantic.  Last Fall a fleet of at least 10 attack submarines of the Russian Northern Fleet ventured from their Kola Peninsula home base to enter the Norwegian Sea and the North Atlantic in the biggest exercise of its kind since the end of the Cold War.

The US Navy pursues two primary interests in sailing north into the Arctic: first, to demonstrate a capacity to threaten Russia’s sea-based nuclear deterrent, and second, to similarly demonstrate a capacity, and willingness, to engage Russia’s naval forces as far north as possible – before they move south and get into position to disrupt  transatlantic sea lanes or to bring their tactical land-attack missiles in range of either Europe or North America in the event of a prolonged European war between Russia and NATO.

Russia likewise has two primary interests in sailing south into the Atlantic: first, to demonstrate a capacity to challenge American (and  NATO) anti-submarine warfare forces heading to the Barents Sea to threaten Russian intercontinental ballistic missile carrying submarines (known as SSBNs), and second, to show they can reach far enough south to be able to disrupt trans-Atlantic shipping and threaten Europe or North America with land attack missiles in the event of a sustained European conflict with NATO.

The forces potentially in the crosshairs of US ASW operations in the Arctic are the seven Russian SSBNs currently operating with the Northern Fleet out of their Kola Peninsula base at Gadzhiyevo and normally patrolling in the Barents Sea. These involve six Delta IV models from the late 1980s and one new Borei model. An additional two Borei subs, along with one older Delta III model, operate with the Pacific Fleet – the plan being to replace all older subs with the new Borei subs and then to deploy five each with the Northern and Pacific Fleets by the mid-2030s. Both the older and the new subs are designed to carry 16 missiles each, and each missile can carry several independently targeted nuclear warheads, but in compliance with the US-Russia New START agreement of 2011, Russia’s SSBNs are armed at less than full capacity, with those in the Barents Sea carrying up to about 400 nuclear warheads.

The basic role of Russian and American SSBNs (the US currently operates 12, carrying an estimated 560 warheads,  deployed in the Atlantic and the Pacific, but not in the Arctic) is to provide an assured second strike or retaliatory capability under their respective deterrence strategies. They are meant to be able to evade attack so that they will survive to deliver devastating retaliatory attacks, even after their country has sustained an initial massive nuclear attack. In other words, according to nuclear deterrence doctrine, the incentive to launch an initial nuclear attack is radically reduced if a devastating retaliatory attack is considered certain to follow.

Russia thus has a primary strategic interest in maintaining a defendable zone or bastion in the Barents Sea where its second-strike retaliatory forces will not be threatened. A former US submarine officer who is now a senior fellow with the conservative Hudson Institute in Washington says American operations within the Barents Sea are “a little like if the Russians deployed a bunch of anti-submarine warfare frigates in the VACAPES” – the VACAPES being a zone of international waters off the Virginia and North Carolina coasts used by US forces for exercises and training.

While the VACAPES may be a kind of bastion by tradition, the US does not seek to establish an explicit bastion for its SSBNs because its sea-based deterrent subs are able to deploy throughout the vast expanses of the Atlantic and Pacific Oceans, reliably staying out of reach of Russian attack submarines. Russian SSBNs are also capable of patrolling in the Atlantic and Pacific Oceans, but to get into the open Atlantic they have to pass through the GIUK Gap (the chokepoint running from Greenland to Iceland to the United Kingdom) where they are readily detected by NATO ASW forces and then, at least theoretically, trailed into the wider Atlantic.

However competitive the relationship has once again become under a nuclear deterrence standoff, both sides, Russia and NATO/US, should have an interest in respecting the other’s assured deterrence forces as supporting strategic stability as long as the they both remain nuclear powers. In a security environment in which second-strike forces would be threatened and rendered vulnerable to pre-emptive attack, the side(s) thus threatened would essentially be left with one of two unacceptable options: either expand its second-strike arsenal to levels that would demonstrate to the adversary that enough subs would survive a first strike to convince the adversary that a devastating counter attack would still be forthcoming; or decide that in times of high tension when conflict was deemed inevitable it would be willing to attack first, before their own forces were attacked (the use ‘em or lose ‘em scenario). The first option is inimical to arms control; the second option radically escalates the danger of a conflict “going nuclear” – nothing would be more destabilizing and dangerous in a major East/West crisis than either side coming to the conclusion that, with war appearing more and more inevitable, it would be advantageous to be the first to launch a nuclear attack.

The point of deterrence is to create incentives not to go nuclear, but strategies to make second strike forces vulnerable create incentives to go nuclear first and early. Nevertheless, and inexplicably so, the Pentagon is now committed, as it reiterated in a 2018 report, to deploying attack submarines, including to the Arctic, so as to “hold the adversary’s strategic assets at risk from the undersea.”  “Strategic” in that context means nuclear, and Russia takes that posture as a clarion call to bolster its bastion protection forces. And the more Russia marshals its Arctic-based strategic forces, the more the US and NATO perceive increased threat, and so they have expanded their forces in the North Atlantic by re-establishing the US 2nd fleet and the NATO North Atlantic Command, citing these moves as only prudent responses to the “return to great power competition.”

A logical and stabilizing alternative would have the US and Russia agree not to threaten each other’s SSBNs (for most of the post-Cold War period that has been the de facto posture each has followed). A proposal roughly along those lines was a feature of the 1987 Murmansk Initiative put forward by Mikhail Gorbachev,  and the idea of ASW-free zones has made it into public discussions from time to time. Canadian analyst Ron Purver floated the idea in 1980s,  and in 2009 a joint Russian and American academic paper briefly proposed an agreement whereby Russia would confine its northern SSBN fleet to the Barents Sea and the US would not operate attack submarines on the Russian side of the Arctic.

It must of course be said that the current context of rising tensions is unlikely to be conducive to an outbreak of that level strategic sanity, but global stability and the logic of their own respective deterrence requirements should move the US and Russia to explore alternatives to the escalating tensions and military maneuvering in the North Atlantic and Barents Sea. And, importantly, their respective friends and allies should, as a matter of some urgency, be prodding them to rethink and shift away from the current and dangerous trend.

As the Canadian historian James Eayrs put it in the context of Cold War arms racing, while the major powers do have a monopoly on sheer force and destructive power, they “enjoy no monopoly over ideas.” And though “the foreign minister of a small state may not be able to summon a gunboat in aid of …diplomacy, to carry a big stick let alone to brandish it, [he/she] can carry a briefcase well enough, and stock it with proposals.

This is would be a good occasion for Global Affairs Canada to load and mobilize its briefcases.

See the link below for the .pdf version.